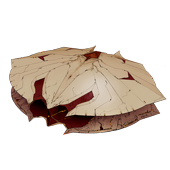 The battleship is the largest standard UFO in the game, and has a top speed of 3300kmh, faster than the MiG-32 Foxtrot or the Corsair Interceptor. In air combat, it should be engaged from behind with fusion torpedoes where it has no defensive weapons. In front, it has wide arc rapid fire weapons that can destroy a Condor in seconds, and a long range missile weapon that does not reach its maximum range. The missile weapon does not lock on, and is easily dodged. It also has an exceptionally quick turning speed, and only a Marauder can successfully get behind the craft and into cannon range without taking return fire.

The battle ship has four floors in total. The bottom level is one large room with walls that reach most, but not all of its length and width. It also houses the singularity core, which is the primary artifact of interest to recover from battleships. The middle two floors serve as little more than corridors and each have only one or two aliens in them. The bridge will have the largest concentration of aliens, and it is also where the praetor will be.

Keep in mind that your soldiers will continually be subject to the TU penalty from the Praetor 's dread effect. He will also begin attacking your troops psionically as they approach the UFO. Considering that the first three floors of the battleship are not that heavily guarded, friendly fire accidents caused by the praetor's psionic attacks may well be the greatest threat you must contend with as you begin breaching work. You must also take care not to accidentally hit the singularity core. Its destruction will nullify the primary reason for assaulting battleships, in addition to annihilating everyone near it when it detonates, similar to fusion cores.

Since battleships can only be assaulted once they've been shot down, as they only perform Ground Attack and Terror missions, neither of which land (a Terror Mission technically does "land" at the target city, but it will never show up as "landed" on the Geoscape), there is always a chance that the Praetor is killed in the crash. If this happens the assault is made far easier, though you will miss out on the chance to capture him alive.

Retrieved from "https://xenonauts.fandom.com/wiki/Battleship?oldid=7868"
Community content is available under CC-BY-SA unless otherwise noted.