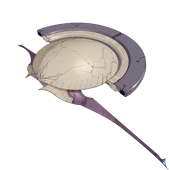 The extraterrestrial Bomber is a medium-sized UFO specialized into a ground attack role. Though easy prey for our interceptors, it can quickly rain death and destruction on a funding nation - souring our relations accordingly.

It employs two linked electromagnetic torpedo launch tracks to do so, forming a semi-circular structure on the rear half of the saucer. Each torpedo is powerful enough to sink a ship and we believe the Bomber capable of launching a pair every six seconds, making casualties from any strafing run a virtual certainty. Thankfully, they are unguided and travel too slowly to be of any practical use against aerial targets, making the Bomber vulnerable in combat.

Although easy to take down, the bomber itself is not the threat to Interceptors. Rather, it's powerful escort craft are what will severely damage or destroy your fighters/etc. A common tactic is to manoeuvre around the escort craft and target the bomber, then retreat once it has been destroyed.

The entire craft has been designed around these weapons. The thin wings jutting out from either side of the saucer are likely intended to stabilize the craft during an attack run, while the saucer itself is largely hollow and presumably mostly used for ammunition storage (the Harridan pilot, craft reactor and avionics are all crammed into a small area at the front). We actually believe that this is the reason why little of these UFOs survives an interception, as the remaining torpedoes tend to detonate either immediately or on impact with the ground. In short, the Bomber an underwhelming combatant, but one that must be dealt with quickly.

The Bomber is relatively slow and heavy, with little in defensive weapons beyond its primary cannon that is better suited against ground targets rather than aerial opponents. Despite this it will always attempt to get a shot off once something enters its firing arc - the projectile fired while slow can be devastating against interceptors. It's obviously not meant deal with interceptors, so eventually alien escort fighters will appear in bomber squadrons to deal with humans shooting it down.

Similar to the Fighter the Bomber has very little in survivalablity once shot down, its munitions would explode either as its being downed or on impact resulting the craft being utterly destroyed. Despite this, some resources can be recovered from the ground debris:

Retrieved from "https://xenonauts.fandom.com/wiki/Bomber?oldid=8086"
Community content is available under CC-BY-SA unless otherwise noted.