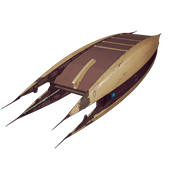 The Carrier is a "Massive" UFO that will appear during the late stages of the game. This UFO is particularly difficult to take down because of the long range of its missiles, its much higher health. This UFO is usually escorted by heavy fighters shortly after it begins to appear.

When raiding a downed or landed Carrier, a team of 10 or more (Shrike or Valkyrie required) is recommended. Most of the combat will take place outside the UFO and on the ground floor, which has tight spaces, making Heavy Plasma armed Androns and Sebillians deadly. The usual rank for the mainstay of the crew is soldier. Because most combat occurs on the first floor, the player will often face little, if any resistance on the second floor. The second floor contains two unknown objects, which resemble dissection tables. The third floor contains a fusion core, which is used to unlock advanced technology, such as the Valkyrie assault boat and Fusion explosives. This should be kept intact at all costs. The final room past the fusion core room contains at least two elite rank units of the same species as the rest of the crew. The command room is long, but the elite units often carry close range weapons, making the encounter somewhat easier. Expect to take most of your casualties on the first floor.

The best way to take down the aliens in the first floor is to place Xenonauts on the main door, station the units and open the main door and close the door after the units have no TU's to fire. Another method is to flank the enemy by sending a couple of Heavy Assault Infantry and Assault units while the main units are in front of the main door.

Carriers that have crash landed will have a damaged datacore and yield less recoverable Alloys and Alenium, compared to ones that landed safely.

Retrieved from "https://xenonauts.fandom.com/wiki/Carrier?oldid=8183"
Community content is available under CC-BY-SA unless otherwise noted.