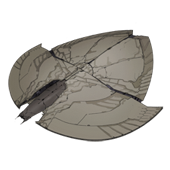 The Corvette is the first substantial 'general purpose' alien craft encountered. Performing in a wide variety of missions such as early terror missions and attacking Xenonauts bases, it is also used in conventional ground attacks early on. However the Corvette's land attack roles are eventually replaced by the Landing Ship.

The Corvette is a medium-sized UFO. It is the first genuine alien warship we have encountered, exchanging the delicate "wing" surfaces used by smaller UFOs as sensor amplifiers for sturdier hull construction and more powerful weapons.

The armour plating on this craft is the same stuff as on the lighter UFOs but applied in greater quantities, adding enormous survivability at the cost of greatly increased weight. The large engines mounted in the rear of the vessel are enough to keep it airborne, but it is slow and ponderous compared to the lighter craft that preceded it (and therefore vulnerable to heavy torpedoes). The power requirements of these engines necessitate both a second power core and an improved method of power transmission - the hull electronics are much more advanced than previously, so we have extracted them for further study.

The primary armament of the Corvette is a forward-firing heavy plasma cannon. This has a slow rate of fire, but generates a powerful explosive projectile that is just as deadly when used to bomb ground targets as it is when used against aerial opponents. These projectiles travel relatively slowly and you may find that our more agile interceptors are able to avoid them with an evasive roll maneuver, but they will inflict heavy damage on anything they hit. Be very careful about flying your interceptors into its firing arc.

Compared to earlier UFOs, more firepower will be required to down this craft due to thicker armor and its offensive firepower is much more formidable. Interceptors should be especially wary of its long range missile attack that can severely damage if not outright destroy early game interceptors. Dodging and weaving may be necessary to avoid its long range fire, despite this it is relatively slow and ponderous - no faster than a Light Scout. Slow but powerful heavy missiles like the Avalanche, may prove ideal as it cannot evade it effectively while the missile can be fired safely out of range of the craft's weapons and easily escape pursuit if necessary.

The corvette is a notoriously difficult UFO to assault, and also becomes one of the most commonly seen UFOs in the mid game as it will eventually preform almost every single Alien Mission at some point before being replaced.

The Corvette will mark the first appearance of Alien Support (Reapers and Drones) and Alien Officers, capture of a live officer for interrogation is crucial for progression. In addition a successful ground assault will yield valuable loot and new research in Alien Electronics.

Corvettes that have crash landed will have a damaged datacore and yield less recoverable Alloys and Alenium, compared to ones that landed safely.

Corvettes are also the first UFO capable of preforming Terror Missions and Base Attacks.

Ingame apperence
Add a photo to this gallery
Retrieved from "https://xenonauts.fandom.com/wiki/Corvette?oldid=8093"
Community content is available under CC-BY-SA unless otherwise noted.