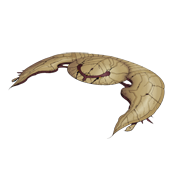 The Crusier is the first encounterable capital ship, it is primarily used for Terror Attacks.

The Cruiser is a large alien capital ship. It is a versatile general-purpose warship capable of filling multiple roles crewed by still more extraterrestrials than the landing ship (despite the latter being a dedicated transport ship).

It consists of a two-level center saucer section containing the command room (upper floor) and a large cargo bay(lower floor) flanked by two "wings" that sweep forward on either side. The majority of the craft's support systems are housed in the wings, most notably the life support systems on the inside and the fine maneuvering thrusters on the exterior edge. The pressurized crew compartments contain a cannon, apparently scaled-up from the Corvette cannon.

Interestingly the protective armor plating has an uneven distribution. The upper section of the saucer protects the command room and has armor over twice as thick as that of the wings, making it highly resistant to incoming fire (one would imagine it also offers added protection for alien assaults squads on the final approach to the designated terror site). That said, even the "vulnerable" wings are still extensively armored, so expect the cruiser to stand to quite a beating before it finally crashes. 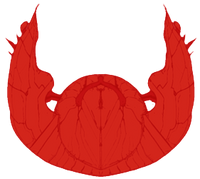 As the Cruiser is primarily focused on Terror Missions and Ground attacks, Soldiers are phased out and replaced with Warriors. The vast majority of a Cruiser's crew compliment are Warriors and ancillary crew (Harridans, Wraiths and Reapers).

Cruisers also see the first appearance of leaders on board UFOs.

Cruisers that have crash landed will have a damaged datacore and yield less recoverable Alloys and Alenium, compared to ones that landed safely.

Crusier in combat
Add a photo to this gallery
Retrieved from "https://xenonauts.fandom.com/wiki/Cruiser?oldid=8125"
Community content is available under CC-BY-SA unless otherwise noted.