Can do Evasive Roll?

100,000
The F-17 is a well rounded Interceptor. While it cannot carry Heavy Missiles, it can perform evasive maneuvers and mount a cannon. Its main disadvantage is its low speed, allowing for UFO's to outrun the F-17.

The F-17 is a reliable workhorse and is the primary dog fighting and escort aircraft of the Xenonauts. Tough, agile and versatile, it mounts both light missiles and a craft cannon and is able to use the ‘Roll’ evasive maneuver in combat to evade incoming projectiles. Although slower than the MiG-32 and unable to carry heavy missiles, its cannon excels at destroying agile UFOs that are difficult to destroy with missile fire and its high survivability means it will usually make it back to base even after sustaining a few hits in battle.

However, the comparatively shorter operational range and low top speed means it is unlikely to catch the faster UFOs and it is better suited to asserting air superiority against the more aggressive UFOs. The lack of heavy missile slots means that it is relatively ineffective against capital ships, which possess sufficiently thick armour that an F-17 does not carry enough ammunition to destroy one alone. In such situations, it is advisable to either deploy multiple F-17s as a squadron or bring along a MiG-32 in a capital-ship hunting role.

While greatly outclassed in the speed department by the mid and late game, the F-17's punch with late-game cannons and missiles is not to be underestimated. Each F-17 will run you the same upkeep as a Marauder, but you can get four Condors for the initial cost of one Marauder, and much more quickly. A squadron of three is fully capable of felling capital ships while also able to tactically outplay alien fighters (though this should always be done manually).

After the player establishes their first base they will be given two interceptors, future F-17's can only be purchased.

The F-17 Condor is the primary Xenonaut interceptor aircraft, a general purpose dogfighter derived from the F-16 Fighting Falcon. The Condor's Autocannon makes it well-suited to destroying smaller craft, whilst it also carries Sidewinder light missiles to make it a credible threat to medium-size vessels

The Condor has broadly similar performance to its parent aircraft but uses a modified airframe built from a titanium / magnesium alloy that gives the interceptor a reduced payload, but significantly longer range and improved durability. The alterations to the airframe have been made based on our studies of F-4 Phantoms damaged during the Iceland Incident. Components containing titanium or magnesium appeared to sustain less damage than those made of aluminium or other materials, suggesting some inherent resistance to alien energy weapons. We hope this reinforced airframe will make our Condors more capable against alien UFOs than interceptors from conventional air forces.

The increased range is believed necessary - we have rather a lot of planet to protect. This has reduced the payload of the Condor, but it is still able to carry two light missiles and a craft cannon. This is a versatile combination; Sidewinder missiles have been proved effective and reliable against human aircraft, but we do not even know if we will be able to get a missile lock on alien vessels. The cannon has a shorter range and fires powerful shells that should be useful in a dogfight. One of the two weapons should hopefully prove effective against an enemy vessel. 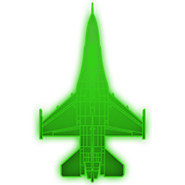