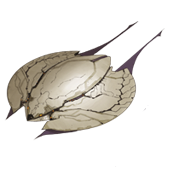 The Alien Fighter is primarily used for intercepting Xenonauts aircraft in areas of heavy Xenonauts activity, as well as escorting other heavier craft later on in the invasion. The Fighter is eventually replaced by the Heavy Fighter as the invasion progresses.

The Fighter is a step up from the (Light) Scout vessel. Keeping roughly the same maneuverability with more firepower makes it a decent escort ship for Scouts and Corvettes. While its slightly faster than the Condor due to its missions it will never flee from interception and likely will aggressively intercept any Condors sent after it. In Combat, the Condor will easily be able to engage one-on-one as it has a surprisingly weak armament for an air supremacy fighter craft. It will attempt to dodge missiles with evasive rolls and close in very aggressively while firing it's own twin set of missiles.

Fighters all invariably explode in spectacular fashion once shot down and as such leave very little to recover. Often a single piece of Alien Alloys can be recovered by friendly forces, but there will never be a need to do ground missions.