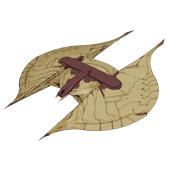 The Heavy Fighter is a more powerful variant of the Fighter which is deployed to fulfill the same roles. It is also one of the more versatile UFO's due to it appearing on every Alien mission soon after it is called into service, with this craft initially appearing in Alien air superiority roles before expanding into other escort roles with most other Alien missions. In all cases the Heavy Fighter is eventually replaced by the Interceptor.

A quirk of Heavy Fighters is that they turn extremely slowly (9 degrees/sec), far slower than their predecessors. This means that they become almost a non-factor if the craft they are escorting is tailed first; two Foxtrots can use afterburners to swiftly close to torpedo range, shoot down the craft they are escorting, and then escape before the Heavy Fighters have turned around.

This atrocious turn rate also means that a Corsair using afterburners can literally fly circles around a Heavy Fighter while staying out of its cannon range, meaning that said Corsair can defeat a head-on attack from a Heavy Fighter without taking any damage.

Fighters all invariably explode in spectacular fashion once shot down and as such leave very little to recover. Being larger and more powerful the wreckage will have some more recoverable materials:

Air combat image
Add a photo to this gallery
Retrieved from "https://xenonauts.fandom.com/wiki/Heavy_Fighter?oldid=7954"
Community content is available under CC-BY-SA unless otherwise noted.