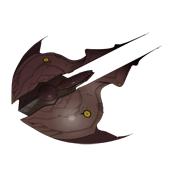 The ultimate Alien air-superiority fighter, being the fastest UFO the Alien invasion force has to offer. The Alien Interceptor will prove to be a very challenging opponent for Xenonaut's air forces. The Interceptor is brought in to replace the roles that the Heavy Fighter were filling, primarily acting as an escort for heavier craft but also preforming air superiority missions. The Interceptor remains a mainstay of the UFO fleet for the rest of the game.

Interceptors are the fastest UFO in the game at 3,800 km/h, meaning they can catch up with just about any type of Xenonaut aircraft. It also possesses superb agility with a turn rate of 120 degrees/second, which is vastly superior to any other UFO. This is a monumental step up from its predecessor, the Heavy Fighter, which was often completely neutered if the UFO it was escorting was simply tailed before engaging. Much like other air superiority-type UFOs, the Interceptor is capable of performing a Combat Roll.

The Interceptor is armed with a basic craft cannon as well as a slow-firing missile launcher that can be dodged easily by any interceptor with the Combat Roll ability. Indeed, its biggest strength in combat is not its weapons (though they are not a notable liability either), but rather its ability to flawlessly track its target with its high speed and extremely fast turn rate.

A Corsair or Marauder is usually able to defeat an Interceptor with little trouble.

Air combat image
Add a photo to this gallery
Retrieved from "https://xenonauts.fandom.com/wiki/Interceptor?oldid=7956"
Community content is available under CC-BY-SA unless otherwise noted.