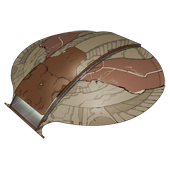 The Landing Ship remains the only UFO to perform Supply Runs for Alien Bases throughout the invasion.

The Landing Ship is a medium-size alien craft with an unusually large crew - though bulkier and more powerful than the Corvette, this saucer-shaped craft is actually primarily a transport vessel.

The saucer is split into a bridge on the upper level and a cargo hold on the level below, comfortably large enough to accommodate a terror squad or even the equipment we believe would be required to establish a permanent alien facility on the surface of our planet. These two rooms are joined by a pair of teleportation devices that instantaneously transport any unit that steps onto one of the platforms over to the other. Despite studying them extensively, we still have no idea at all how these devices function.

Almost as interesting is the armour plating on the exterior of the ship. It requires immense firepower to crack one of these vessels open, which we assumed was due to more extensive armour plating - but, troublingly, the Landing Ship actually has much less armour plate than the Corvette. We have taken samples of this hardened plate for further study. The vessel's primary weapon is just a scaled up version of the cannon on the Corvette, but it also possesses a smaller rapid-fire secondary weapon that packs sufficient punch to make a frontal approach inadvisable.

Guards are phased out with the Soldier now forming the backbone of the Alien forces. In addition Warriors begin to appear alongside Soldiers, and are now no longer exclusive to Terror and Base Attack missions, however Warriors still appear more commonly on these missions. Warriors tend to remain inside the UFO if a UFO is present.

Landing Ships that have crash landed will have a damaged datacore and yield less recoverable Alloys and Alenium, compared to ones that landed safely.

Retrieved from "https://xenonauts.fandom.com/wiki/Landing_Ship?oldid=8123"
Community content is available under CC-BY-SA unless otherwise noted.