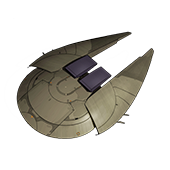 The Light Scout is an early UFO encountered by Xenonauts, it is very weak and will almost always attempt to flee from Xenonaut Aircraft. Over time this class of UFO will be replaced by the faster but less agile Scout UFO, which will replace it in all roles.

My team has finished preliminary studies on the recovered UFO hull, we have designated the "Light Scout". It is very small compared to some of the orbital signals we have detected; barely more than a probe.

It is approximately a dozen metres from nose to tail, comprising a "saucer" section and two "wings" filled with what we believe to be sensor equipment. Two small thrusters mounted on the back of the saucer provide propulsion. The craft does not appear to have a reactor of any kind, instead seeming to draw power from rechargeable capacitors in the wings. It is almost certainly not capable of independent operation, instead it would need to be launched from a "home" vessel at the start of each mission (and return there afterwards).

It has poor combat performance for such an advanced vessel; it is no match for one of our Condor interceptors. The main weapon is an energy cannon mounted beneath the saucer, which has a relatively slow fire speed and a shorter range than our Sidewinder missiles. The armoured shell is remarkably strong and impressively heat-resistant given it is only a few millimetres thick, but is too thin to offer much protection against modern munitions. Enjoy the gentle introduction while it lasts, Commander - I doubt the larger ships will be such easy prey.

The Light Scout is unique in that it's the only non-fighter UFO that is nimble enough to perform an evasive roll to avoid missile attacks similar to the Fighter and other interceptors. Unlike them though, its not particularly adept at it. It is relatively weak and quite slow, even the F-17 Condor is capable of exceeding its speed and forcing it down with it's autocannon. Due to its ability to roll, fighters lacking an autocannon such as the Mig-32 Foxtrot may have some difficulty in hitting it with missile attacks.

The Light Scout has only a single room, which acts as the Bridge and Engine Room. There is little cover inside the Light Scout.

Due to the Light Scouts small size, breaching this UFO is relatively easy. Simply opening the door and throwing in a Flashbang or two will usually be sufficient in suppressing any Alien inside the UFO, and any suppressing gunfire will usually end up hitting or suppressing any other alien inside. Since the Light Scout lacks any effective cover this means any Aliens inside will be mostly exposed. Due to the central position of the craft's light engine, its highly likely that extended gunfights or the use of any grenade (including flashbangs) could detonate the engine which could be hazardous to any entry team. Tactically the occupants are likely to watch the main door and fire on approaching breaching teams preparing to enter, using the door as cover so it's best not to be caught off guard.

Light Scouts that have crash landed will have a damaged datacore and yield less recoverable Alloys, compared to ones that landed safely.

Light scout in combat.
Add a photo to this gallery
Retrieved from "https://xenonauts.fandom.com/wiki/Light_Scout?oldid=8220"
Community content is available under CC-BY-SA unless otherwise noted.