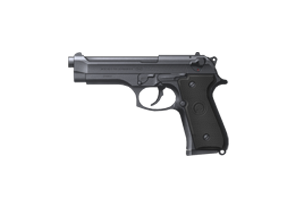 The ballistic pistol is a semi-automatic sidearm that has been in common military use for some years. It is light and accurate over short ranges, and also much faster to aim and fire than other Xenonaut weapons – making it an ideal secondary weapon for snipers or soldiers equipped with heavy weaponry.  However, although it can deal out a lot of damage at close quarters due it its high fire rate, the pistol lacks any appreciable armour penetration and is inaccurate over range.

This is balanced against the fact it only takes a single hand to fire, allowing pistol-equipped soldier can carry a variety of objects in his other hand, such as grenades, medipacks or even a combat shield. It is therefore also an invaluable tool for soldiers in close support roles. These and other types of pistols give a 1.5x bonus to a soldier's chance at reaction fire, making it useful to cover door ways or train new recruits.