The Reaper is a horrifying insectoid creature, which moves reasonably fast and can kill any organic unit in one hit. It is much feared in terror sites, where hapless civilians can rapidly swell the alien ranks. It associates itself with the Sebilian race. Reapers should be priority targets in combat, as they can quickly multiply on the battlefield and swarm your men.

Reapers are fast-moving creatures that use melee-based attacks only, they are capable of moving extremely long distances and their attacks are capable of killing virtually any soldier in a single swipe. Reapers are intelligent as they will do anything they can to avoid ending their turns within range of a human target, meaning they will often hide in areas and wait for an opportunity to strike, making urban combat situations against Reapers extremely difficult.

Anyone, civilian or soldier, that is killed by a Reaper will eventually become a zombie. The zombies will single-mindedly charge any available targets. If the zombie is killed or left alive long enough, it will give birth to a reaper.

The main weakness of Reapers is that they can only use melee attacks, meaning anyone with a jetpack can easily get out of range of a Reaper, also reaction shots may be effective in killing Reapers as they charge.

There is an even fiercer creature, called the Reaper Alpha. They appear only on Battleships or Carriers and their related crash sites. They move extremely fast and must be dealt with quickly. 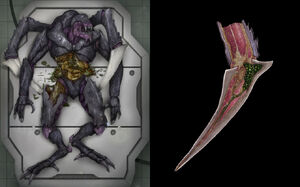 The Reaper is a six-foot tall insectoid nightmare with chitin blades strong enough to pierce steel and a particularly horrific method of reproduction. It is a biological weapon of mass destruction, a monster that spreads death and terror in equal measure.

Each Reaper is a parasitic creature that reproduces through implanting larvae inside other living organisms. These larvae secrete a chemical that disrupts the nervous system of the victim, leaving them shambling around in a state of damned half-life while the larvae gestate rapidly inside their body and metabolise it from within. Within a couple of minutes a fully-developed Reaper will burst free from the remnants of its host and head off in search of fresh victims (an implausibly short gestation period to occur naturally, so presumably alien technology has been used to accelerate it in some manner). In any case, this ability is highly troubling; the unfortunate host is likely to find the process unpleasant in the extreme, and it potentially allows these creatures to multiply quickly on the battlefield.

They are well adapted to the role finding and infesting their victims, possessing well-developed sensory organs and the ability to move across the battlefield with inhuman speed. Wiry but extremely strong, the beasts can easily generate enough force to penetrate personal armour with the large blades protruding from their shoulders. These blades are actually hollow, containing a muscular tube that houses the larvae and neurotoxic fluid to be injected into the victim once the blades have torn an opening into their flesh. A single attack is all that is required to reduce the victim to a hideous zombie, whatever personal armour they may be wearing.

Despite this, these primal horrors have obvious weaknesses. A lack of ranged weaponry and the relative fragility of their chitin plates leaves them vulnerable if caught in the open or sighted at a distance. They also possess only rudimentary swarm intelligence, making them fearless and difficult to suppress but incapable of advanced tactics. This is truer still of the zombified hosts, which apparently simply lumber towards the nearest target and attempt to club them to death with their swollen fists. 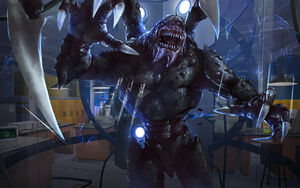 I consider it prudent to preserve our captive alien specimens in case further analysis is required. The Reaper was an exception - I had it incinerated the moment we concluded our studies on it. The thought of a creature such as this breaking loose in our cramped underground facility is the stuff of nightmares.

In any case, it hardly made a good captive - it was extremely aggressive and clearly had no more than animal-level intellect. Simply walking past the holding tank would see the creature flinging itself at the glass walls in a violent frenzy, a flurry of scything blades and slashing talons. This was particularly irritating given the fiends in engineering installed our new coffee machine only a few feet from the beast, ensuring the glorious silence of our labs was regularly punctuated by screams and the noise of shattering crockery.

Nevertheless, our work was useful: it confirmed our initial suspicions that Reapers are highly mobile and have excellent sensory awareness. We also discovered a number of weak points in the otherwise durable chitin shell of the creature. These have been summarised and issued to your troops, boosting damaged inflicted by roughly ten percent.

We were able to observe the horrific Reaper reproductive process first-hand by introducing cattle into the holding tank. It appears the victim is doomed the moment that it is speared and injected with larvae, turning them into a bloated mass of flesh (aptly referred to as a "zombie" by your men). The larval growth process begins the growth process, but its not actually required to complete it - if the zombie is terminated before gestation is complete, an immature Reaper bursts free of the host's corpse and springs into action. These immature Reapers mature in a matter of minutes and seem just as combat-effective as adult Reapers, so bear in mind that gunning down a zombie may not be beneficial in every situation. While I am not sure what the aliens have done to enhance the original Reapers, there is no doubt that they have evolved into the very definition of a terror weapon.