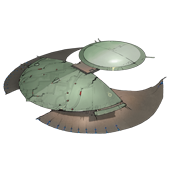 The Scout replaces the Light Scout shortly after the start of the Alien Invasion. This version of the Scout remains in use by the Aliens for a longer period of time, despite this it remains only in use in Alien Research missions. However as the war escalates this UFO is eventually replaced by the Corvette in Research missions.

The alien Scout is small craft with a larger crew than the Light Scout. Though still a scout craft, it is larger, better-armed and more dangerous than its predecessor.

The design consists of two crew compartments, a sizeable semi-circular forward compartment that contains the ship's control systems and a circular bay at the rear of the vessel that houses the ship's power source. It has substantial armour plating around its key compartments, usually 8mm thick but rising to double that in some areas (perhaps suggesting the "armour" on the Light Scout was in fact little more than a heat shield). This makes it a much more formidable combatant than the Light Scout, particularly coupled with a plasma beam that has greater range and inflicts additional damage.

The hull is dotted with an extensive network of sensors that feed data into crew compartment. These glowing "eyes" seem to track everything from airspeed to infra-red emissions and probably represent the method by which the craft gathers intelligence on our planet and species.

The Scout is much harder to catch compared to its predecessor, capable of outrunning the Condor if it wishes to. Its appearance often means the development of the Mig-32 Foxtrot Interceptor is necessary if the Xenonauts want to reliably intercept them. Despite their faster speed they are not much more dangerous and cannot perform an evasive combat roll, making them much easier to deal with than a Light Scout.

A Scout can be easily shot down by a single Foxtrot interceptor, even with basic Avalanche torpedoes.

The Scout consists of two rooms, the forward bridge/engine compartment which connects to the main Scout entrance and the rear datacore section.

The bridge room offers good amounts of cover for the defenders, however its small size leaves the defenders vulnerable to explosive/flashbangs as well as close combat shotguns. The datacore room holds the datacore and the UFO power source which is explosive, there is little room to maneuver and gunfights might result in it being detonated. An undamaged Power Source may yield some recoverable Alenium, which is crucial for further research and as a raw resource.

The Scout's small size favours the usage of shotguns, while there is good cover the small size allows shotgunners to nullify cover. Opening the entrance and filling the bridge with flashbangs will be effective in stunning most, if not all, of the defending aliens.

When storming the datacore compartment, be wary of any alien entering the room from the bridge. Aliens may also attempt to retreat back into the bridge.

The datacore room is a small room with little room to move, the biggest risk is moving into the room via the bridge as a alien could open the door to open fire. Liberal usage of flashbangs and shotguns will be effective in clearing out the the rear compartment. There are usually only one or two aliens there.

Scouts see the introduction of Caesan Psions, capable of launching psionic attacks. More Guards are added to the roster and now the Alien crew outnumber the attacking humans.

Scouts that have crash landed will have a damaged datacore and yield less recoverable Alloys and no Alenium, compared to ones that landed safely.

In game apearance
Add a photo to this gallery
Retrieved from "https://xenonauts.fandom.com/wiki/Scout?oldid=8095"
Community content is available under CC-BY-SA unless otherwise noted.