The X-120 Fury is the ultimate human air superiority aircraft. It is capable of single-handedly destroying any detected UFO. However it will not leave behind any wreckage to recover, and the Fury is extremely expensive to obtain, severely limiting its usage.

The apex of Human adaptation of Alien technology, the Fury is the ultimate interceptor available to the Xenonauts. It is based on Mach 3 recon aircraft like the SR-71. Flying at an incredible speed, it is capable of reaching any point on Earth in under two hours. The Fury uses a Singularity Torpedo as its primary weapon. Unlike all other Xenonaut aircraft the Fury will win an engagement one hundred percent of the time, but at the cost of preventing any wreckage from being generated. This makes the Fury the ultimate weapon in air superiority.

However, the Fury suffers from some significant drawbacks which severely limit its potential. Firstly, the Fury is extremely expensive, costing $600,000, 60 Alenium, 60 Alien Alloys, and a Singularity Core to construct, of which the Singularity Core can only be found on a captured Battleship. The second drawback is that for one Fury, you would need to down two Battleships to gain a Singularity Core, since the first Core is used for research. The final drawback is that due to the Fury obliterating any UFO it targets, it can't be used to easily down high-class UFOs, and by the time the Fury is available, humanity should have won the air war.

The X-120 "Fury" interceptor is the ultimate weapon in the battle for our skies. It is an unmanned craft with virtually unlimited range that can fly so high and so fast that no UFO has a hope of outrunning it, let alone intercepting it. It can travel at Mach 8 (some 10,000 kilometers per hour), allowing it to reach any point in the world in under two hours. It carries a single super-heavy Singularity Torpedo on each mission.

The Fury was influenced by the allegedly secret SR-71 "Blackbird", which is almost invulnerable to conventional technology due to its impressive speed and service ceiling (not that our organization would have much trouble dealing with them). The design has been evolved and enhanced, not least by removing the pilot and the equipment required to keep him alive. An autonomous flight computer tracks sensor data against mission parameters, adjusting its behavior to ensure the mission is completed as quickly and safely as possible. The engines are a three-stage turbojet/ramjet/scramjet design where each stage speeds the craft to the point at which the following stage can kick in.

The scramjets engage at Mach 4 and each produces 75,000 lbs. of thrust, rapidly accelerating the Fury to Mach 8. At these speeds, air resistance heats the surface of the craft to 4,000 degrees Celsius, ordinarily impossible to sustain without a spacecraft-style ablative coating that requires replacement after every flight. However, hardened alien alloys have proved more than capable of resisting that sort of temperature indefinitely - allowing the Fury to travel so quickly that it is entirely immune to damage from enemy UFOs. Unfortunately, as weapons also need to be designed specifically for hypersonic launch, the speed of the craft also limits the weapons that can be carried to just one: the super-heavy Singularity Torpedo.

Unsurprisingly, the power requirements for these monstrous engines and the highly advanced flight computer are enormous. A Singularity Core is the only viable power source, so each Fury built will require us to capture one from an extraterrestrial capital ship.

The X-120 Fury is available once a Singularity Core is researched from a downed Battleship, as well as other successive research requirements.

Hangar view of a Fury 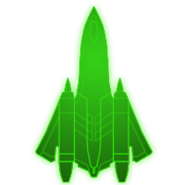