The Corsair is the first researchable aircraft derived from Alien materials and equipment. It is meant as a replacement for the Condor Interceptor as it is faster, more armored, and stronger in all aspects. However, it comes with a big price tag of $300,000 (plus 10 each of Alenium and Alien Alloys), making it a heavy investment to produce. Armed with dual cannons it is highly specialized in the air superiority role and will have trouble delivering enough firepower to take down capital ships, but it excels at dispatching fighters. It is fast enough to keep pace with MiG-32s so they can escort them without slowing them down as F-17s would.

Another drawback is that depending on your research path the X-37 may be available only relatively shortly before the X-59 Marauder, which outclasses it almost unconditionally. As such you may not want to invest in too many because of their quick obsolescence.

It seems to bear characteristics from the real-life F-14 Tomcat and YF-23.

The X-37 Corsair is the first aircraft purpose-built for fighting extraterrestrial craft. We have made extensive use of alien materials when designing the airframe and used materials known to be resistant to alien weapons for everything else - producing an aircraft that is faster, tougher, and no less agile than our F - 17 Condor interceptors. It is not capable of carrying heavy torpedoes, so it should complement the Foxtrot rather than replace it.

In many respects, the design of the craft is evolutionary rather than revolutionary - it is an immense undertaking to design an entire aircraft in such a short time, even for someone as intelligent as myself. Many of the gains have been made by reproducing existing systems using more efficient alien materials/manufacturing techniques, but we have made two main innovations - the introduction of variable-sweep wing design and the new ER-3 Alenium Impulsion reactor/turbine system. The latter produces twice as much thrust as a conventional jet turbine, the former increasing maneuverability at low speed while also increasing performance at high speeds. As a result, the Corsair can cruise at almost 3,000 km/h despite the extra armor making it larger and heavier than its predecessor.

Construction of each Corsair represents a significant investment of time, money, and alien materials, but I have little doubt that conventional aircraft will rapidly become obsolete as the invasion escalates further.

Hanger view of a Corsair 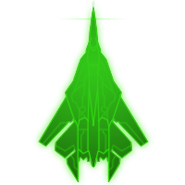