The Marauder is an advanced Xenonaut fighter/interceptor aircraft. It is a complete improvement over the Corsair, Foxtrot, and Condor and should replace them as soon as possible. It has a cannon hardpoint and two missile hardpoints, which can equip light and heavy missiles, like the Foxtrot.

In combat, the Marauder can destroy an Interceptor in single combat, supposing it has at least Laser weaponry and plasma warheads, as well as enough fuel to perform evasive rolls regularly. At full speed (including afterburner) the Marauder can outrun any UFO so far (requires testing with anything above a Battleship). A full squadron of three has a very high auto-resolve chance against lone UFOs, but those with escorts should be done manually.

With plasma torpedoes, alone Marauder can destroy anything up to a Landing Ship without taking any damage, and two can take down Cruisers and Strike Cruisers unharmed.

It takes 200 research hours to research.

The X-59 "Marauder" is an advanced interceptor designed to counter all known alien craft. It is fast, durable, and well-armed (equipped with both a cannon and heavy torpedoes) and can perform the Combat Roll maneuver in combat. These characteristics make it just as adept at dealing with small alien interceptors as it is attacking large capital ships.

Our greatest advances in performance came from setting aside the old conventions of aircraft design. The fuselage of the Marauder contains a network of powerful integrated thrusters that provide lift and propulsion, with the stubby forward-swept wings mostly being employed for fine maneuvering. While these wings contribute heavily to the overall agility of the interceptor, it is actually entirely capable of flying without them. The same can be said for the tail / vertical stabilizers, where the traditional vertical arrangement has also been replaced with a more unusual forked design.

With a few aerodynamic concerns, we have been able to focus our attention on combat performance instead. The armor-plated "shell" of the craft is fabricated entirely from hardened alien materials and is nearly four inches thick in some areas, making it more akin to a flying tank than a normal interceptor. The extra engine thrust allows it to carry both a cannon and heavy torpedoes, making it a much more rounded combatant than any of its predecessors. The resulting interceptor is squat, ugly, and capable of destroying almost anything it encounters (much like our engineers).

Hangar view of a Marauder 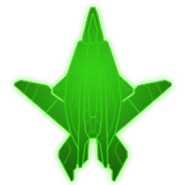